Tether took a new move today – it surpassed the long-standing Bitcoin Cash and Litecoin. At press time, USDT or Tether counts among the top five cryptocurrencies on coinmarketcap.

Notably, while the other largest cryptocurrencies are declining with the red figures over the past 24hrs. In contrast, Tether is surging up with 0.01 percent. In fact, the average market cap is quite closer to the market cap of EOS, which stands on the fourth position. As per the data from coinmarketcap, Bitcoin, XRP, ETH, EOS are still on their position with slight fluctuations in trading volume, while Tether captured the fifth place by surpassing to Stellar, Litecoin and Bitcoin Cash. Indeed the average market cap of Tether is $2,035,988,719 and is trading at $1.01 respectively.

Although Tehter is a controversial cryptocurrency but it is hitting the new spot quite often. Tether is by far the most popular stable coin, a token that is backed by U.S dollar. Recently, the major trading contribution for Tether comes from BitMex, CoinBene, ZBG, EXX, OKEX, Binance, DigiFinex and other crypto platforms.

Beside Tether, TRON is also performing well and can be seen a step ahead than Stellar and Bitcoin SV. While Tether sits on the fifth spot, TRON surpassed Stellar and captured the eight largest position. Significantly, the average trading volume for TRX counts $1,806,891,933 which is slightly down with 9.08 percent during the last 24 hrs.

What’s your take on the growth of USDT and TRX? Do you think Tether will step forward than EOS? Share your predictions. 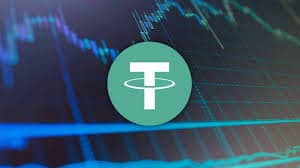 The presented content may include the personal opinion of the author and is subject to market condition. Do your market research before investing in cryptocurrencies. The author or the publication does not hold any responsibility for your personal financial loss.
Share
Previous Coinbase And Kraken To Support Ethereum Hard Fork
Next Iran Soon to Unveil Cryptocurrency With Aim to Skirt US and SWIFT: Source

All rights reserved for Cryptoo.news